Since 1979, capital punishment has been a pillar of the Islamic Republic of Iran’s criminal justice system. As other regional and majority-Muslim countries have done away with the death penalty in law and practice, the Iranian judiciary has headed off challenges to its harshly punitive approach by penalizing reform and accountability-minded activists with prosecution and jail time, refusing to legally register anti-death penalty groups, and throttling popular expressions of dissent. On the international stage, judiciary officials emphatically defend the death penalty as a matter of divine mandate and justified by Iran’s culture.

What is the human cost of this policy? The same judicial officials who insist before the world that Iranians fundamentally approve of the death penalty, do not make data publicly available regarding its use, enshroud individual cases in secrecy, and, as noted, prevent activists and organizations in Iran from monitoring and investigating. To overcome these obstacles, Abdorrahman Boroumand Center for Human Rights in Iran (ABC) tracks official, semi-official, and unofficial reports - including from human rights organizations - and communicates with informed sources with knowledge of prisons, courts, and families and loved ones of persons sentenced to death. Such contacts provide ABC a more complete - though always imperfect and subject to change - picture of the scope of executions in Iran.

The use of the death penalty is marked by serious, widespread failures of the right to due process. In no case of which ABC is aware have defendants benefitted from a lawyer at the interrogation stage. State-assigned lawyers often meet their lawyers for time the day of trial.  Defendants have restricted access to lawyers and evidence in national security cases, and are subjected to incommunicado detention, solitary confinement, and torture to extract confessions.

According to data collected by ABC, from January 1, 2011 through December 31, 2020, at least 5,923 individuals were subjected to the death penalty in Iran. The graph below displays yearly totals for this period. 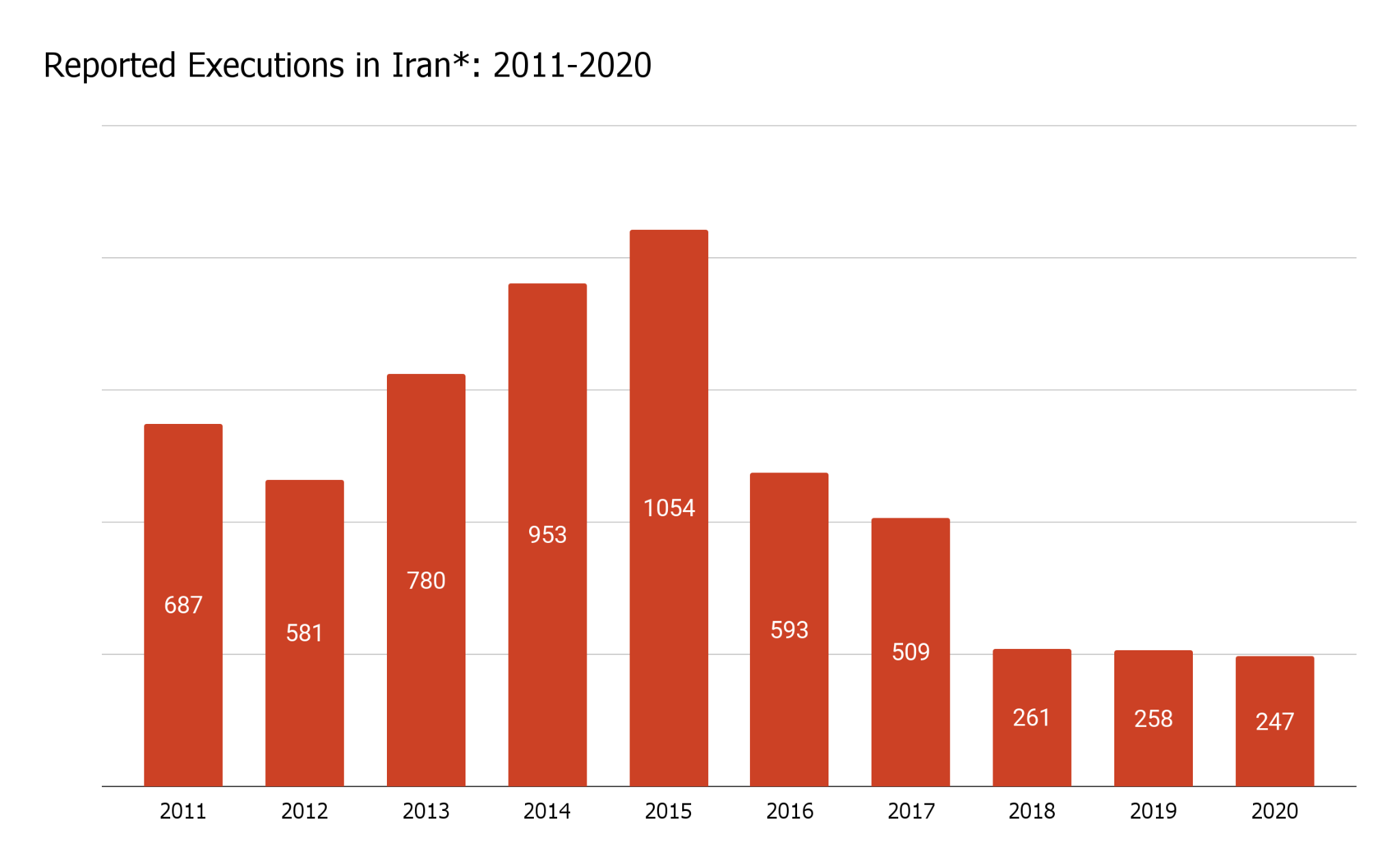 How does Iran’s judiciary execute?

The vast majority of executions conducted in Iran in the last ten years were carried out by hanging. In at least two instances (one in 2020 and one in 2015), the condemned were subjected to firing squad. At least 399 hangings were conducted in public: these appear by year in the graph below. 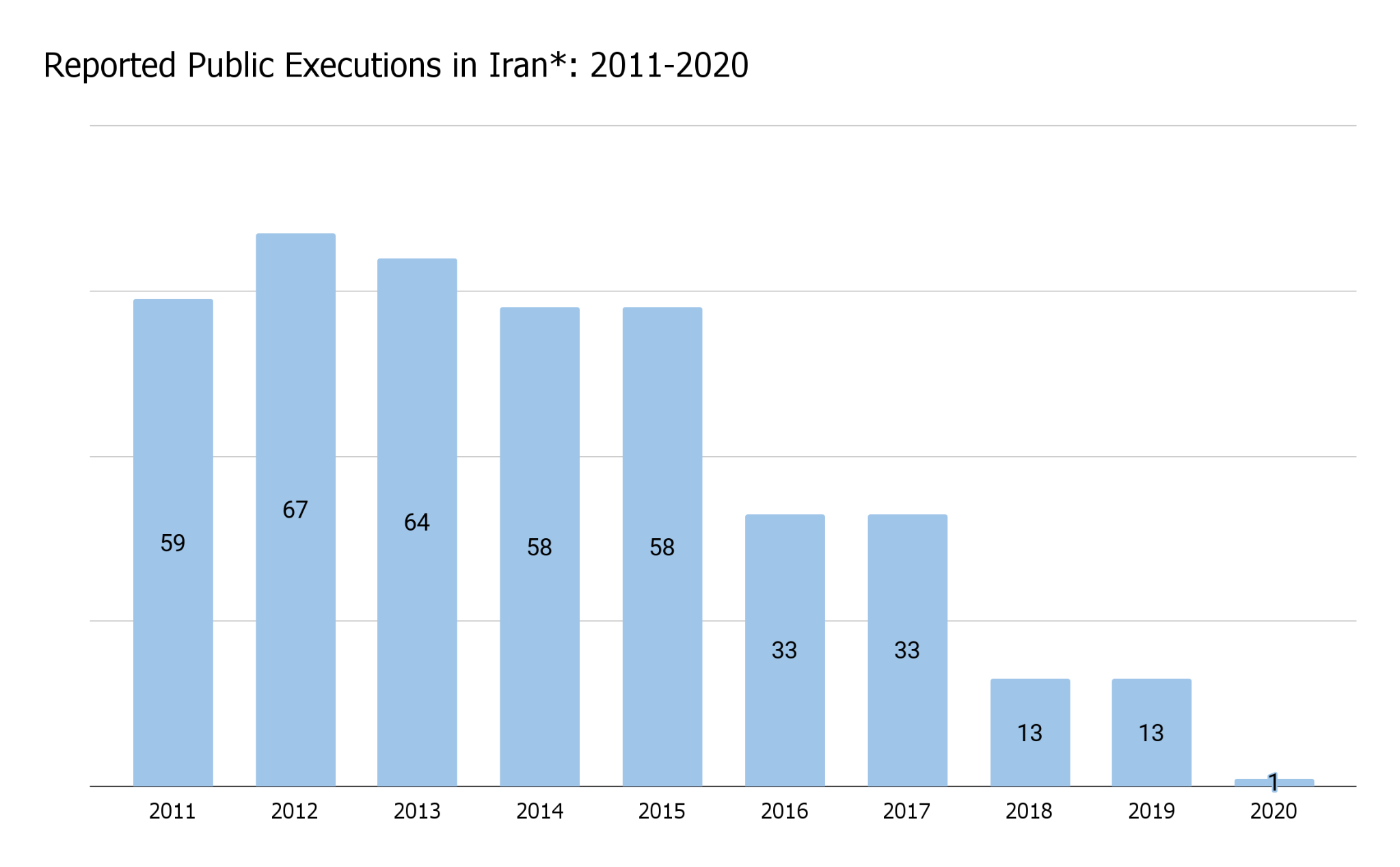 Who does Iran’s judiciary execute?

In the ten-year period, sentences of execution were disproportionately carried out for members of ethnic minorities. The graph below charts executions of individuals believed to belong to Iran’s Kurdish (466 total), Afghan (138 total), Baluch (291 total), and Ahvazi Arab (34 total) minorities, by year. 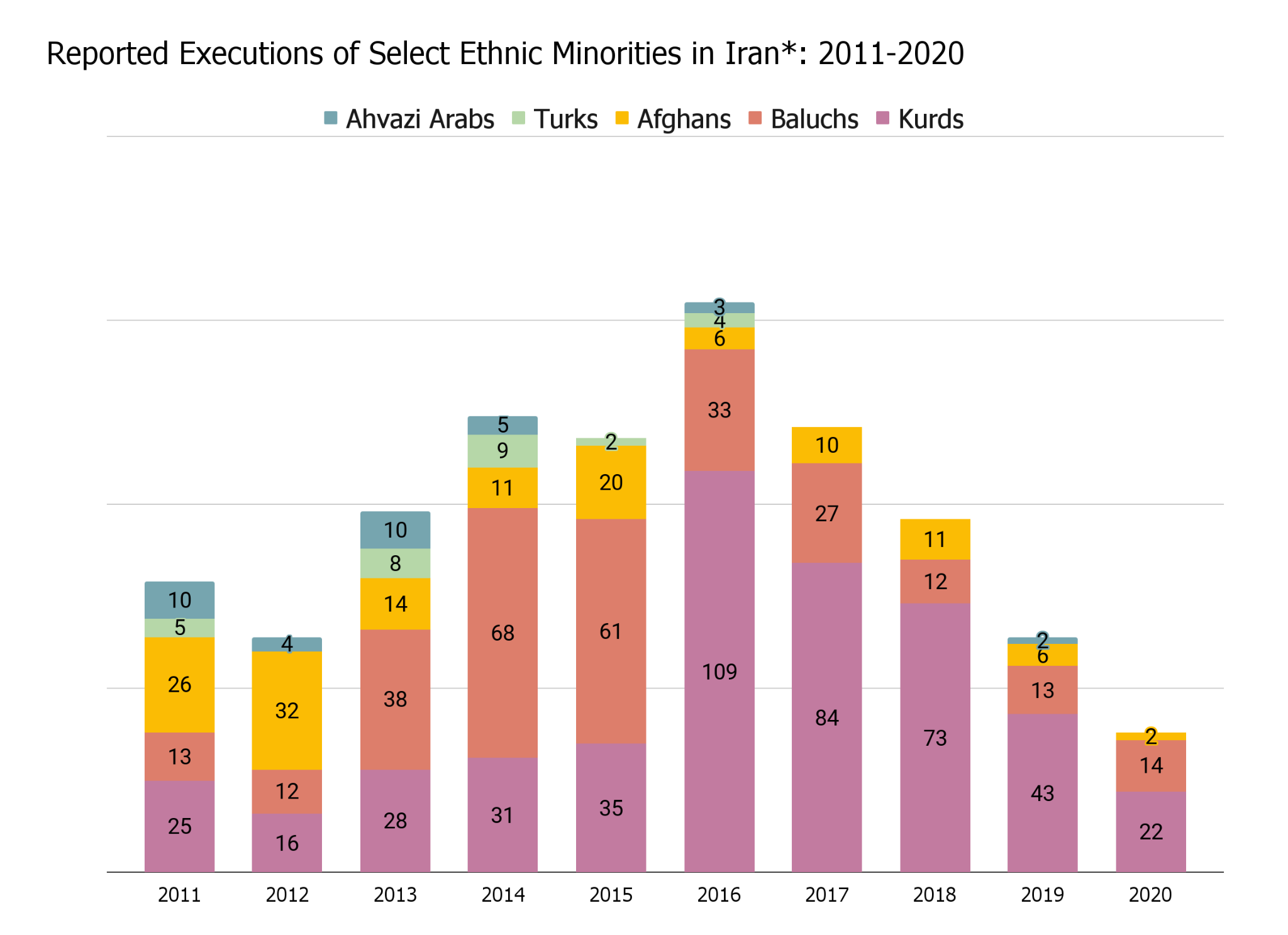 Juvenile offenders - those under 18 at the time of the crime for which they were convicted - have continued to be executed in blatant contravention of international law. A total of at least 83 were put to death in the period. 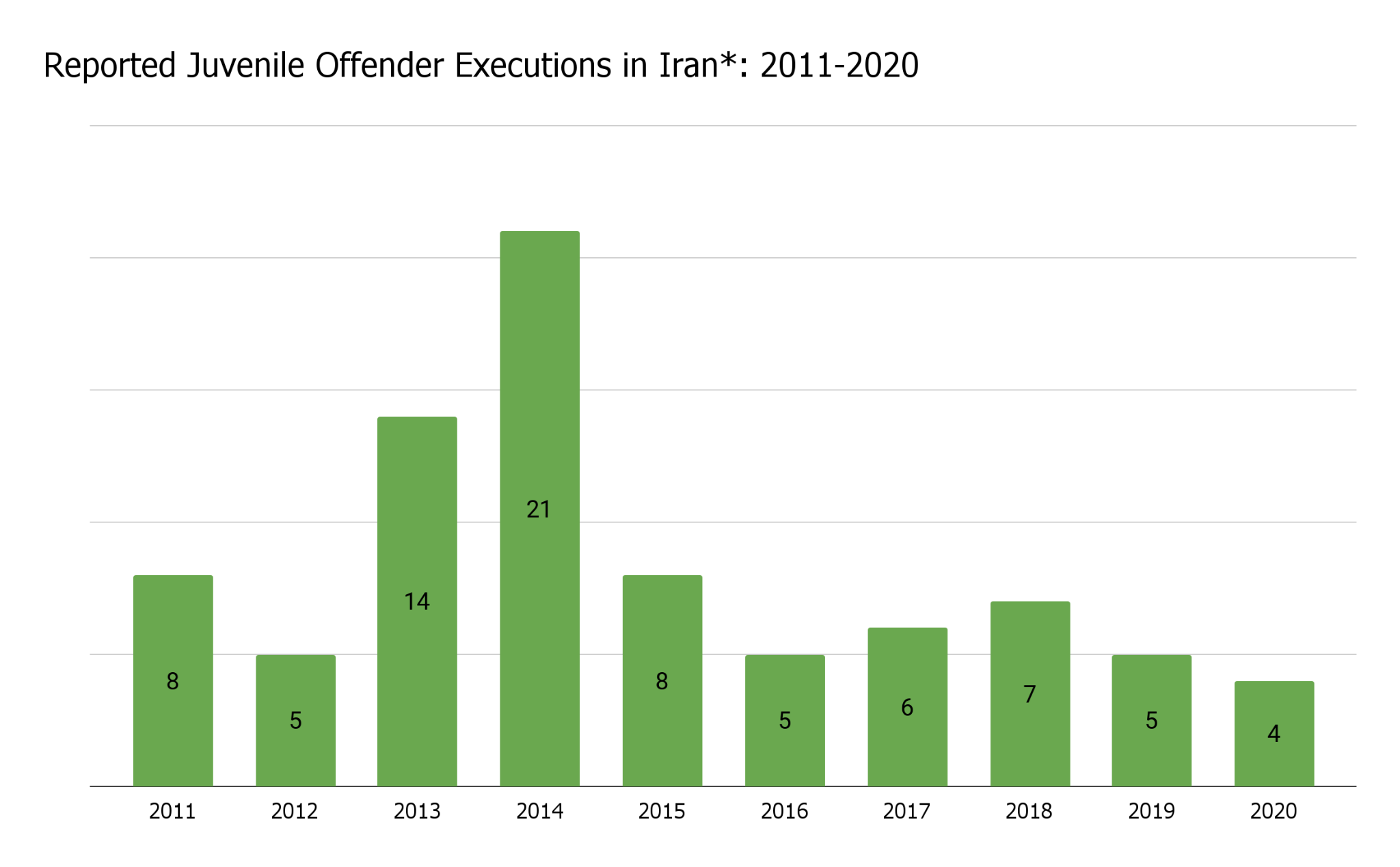 In June of 2013, a reformed Penal Code took effect which permits - but does not require - judges to issue punishments alternative to execution where the juvenile offender did not understand the nature of the crime or its consequences, or when their “mental development and maturity” at the time of the crime is in doubt. 69 juvenile offenders have nonetheless been put to death since that time.

On what charges does Iran’s judiciary execute?

Iran foresees the death penalty for more than 200 acts - many of which should not be criminalized at all, and the majority of which  should not carry capital punishment, per international law. Because of peculiarities of Iran’s criminal law, based on religious jurisprudence, for all such acts, the death penalty is mandatory in case of conviction: the judge has no leeway in reducing a sentence in light of mitigating circumstances.

The International Covenant on Civil and Political rights to which Iran is signatory stipulates that countries which retain the death penalty can use it only for the “most serious” crimes - i.e., those involving intentional killing. Murder meets this standard. Executions of people charged with murder - a total of 1,733 for the period - are shown in the graph below: 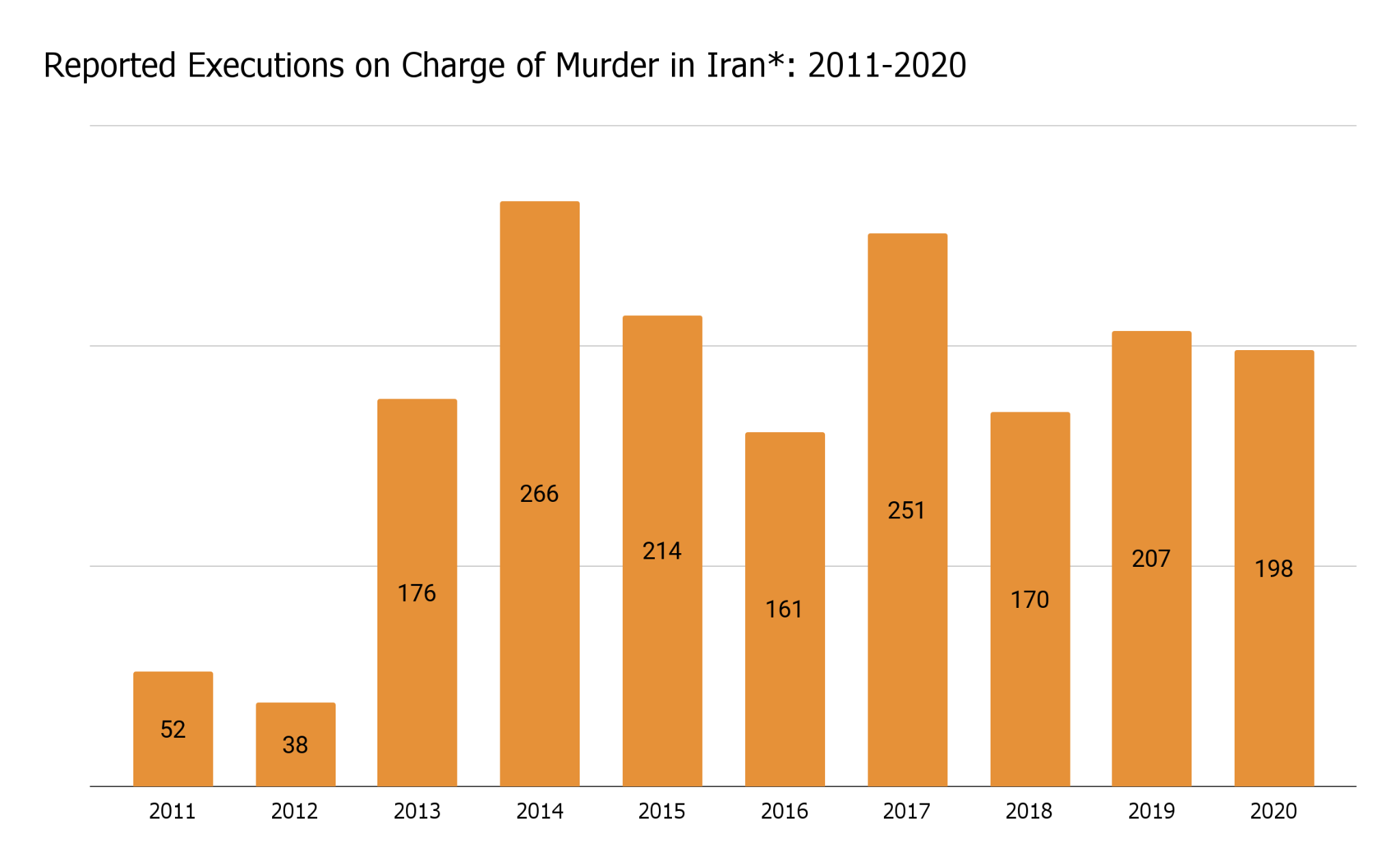 A striking number of executions are carried out for acts which blatantly fail this “most serious” crimes standard. The graph below represents two of these: robbery (87 total) and sexual offenses (e.g. rape, adultery; 348 total). 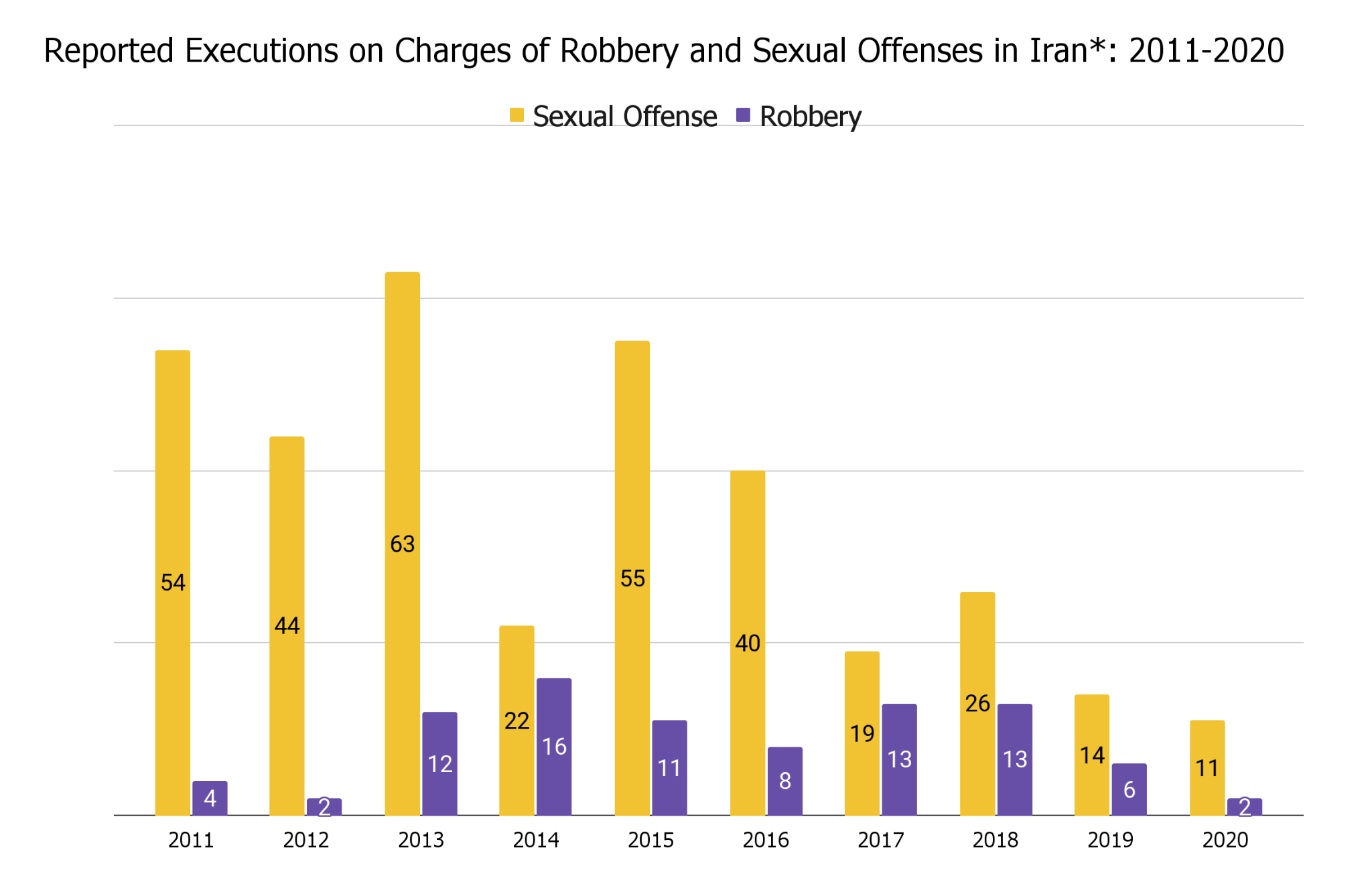 Remarkably, the class of offenses for which the single greatest number of individuals (and majority) were put to death in the 10-year period also do not meet the “most serious crimes” standard: drug offenses, at 2,976. Executions on drug charges (e.g. trafficking or manufacturing banned substances) by year appear in the graph below: 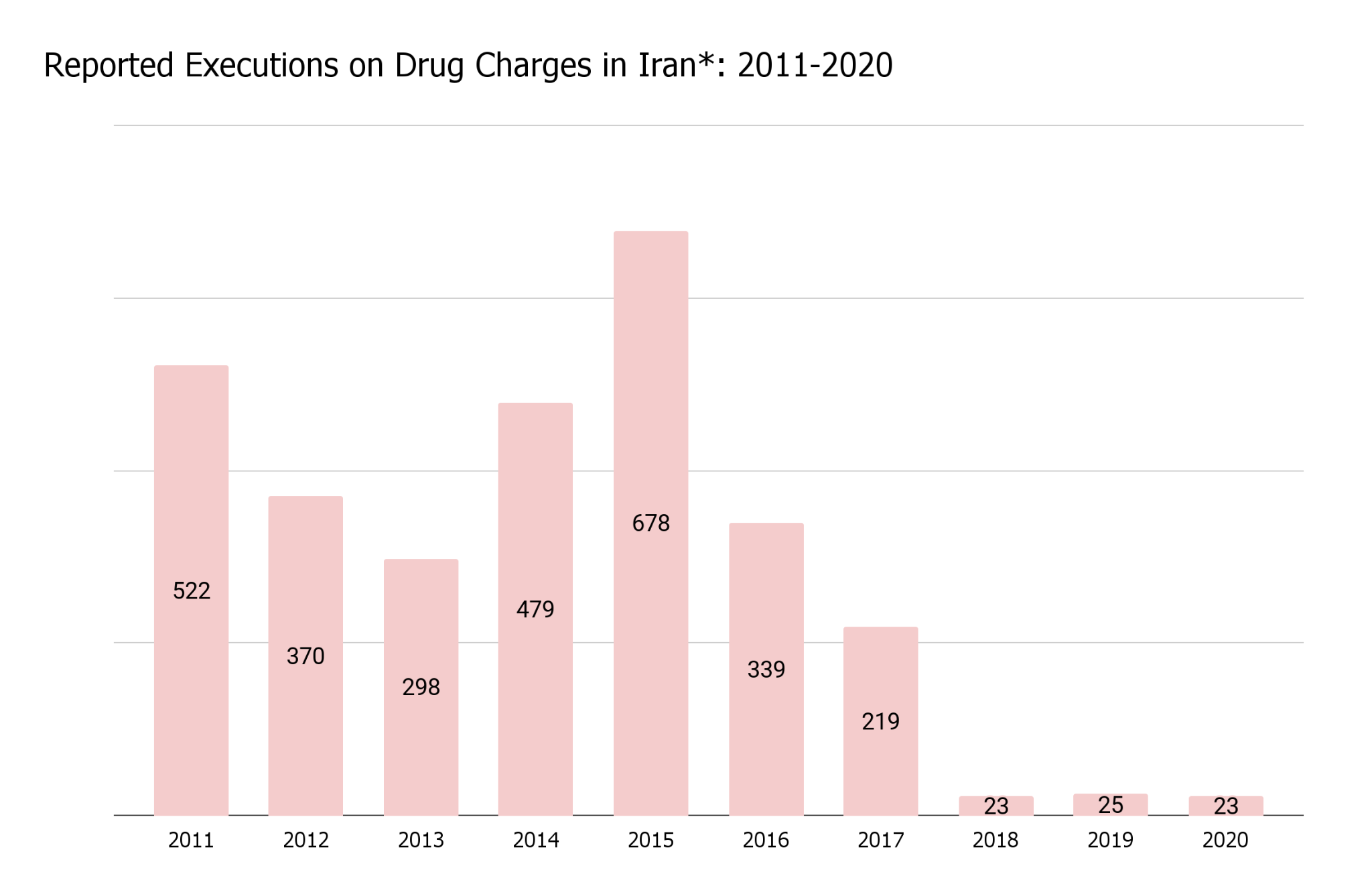 The considerable reduction in drug-related executions (and indeed, executions in general) in the last three years of the period followed the 2017 reform of Iran’s anti-narcotics law, which reduced the scope of the death penalty chiefly by raising the thresholds for volumes of drugs which an act must involve for a crime to be capital. Notably, the change did not do away with executions for drug offenses altogether: since implementation began in early 2018 through the end of 2020, 71 individuals have been put to death for drug crimes.

Iran’s judiciary also implements death sentences for political crimes (e.g., membership in a banned political party or terrorist group), even when no homicidal act is alleged. These total 154 for the period: 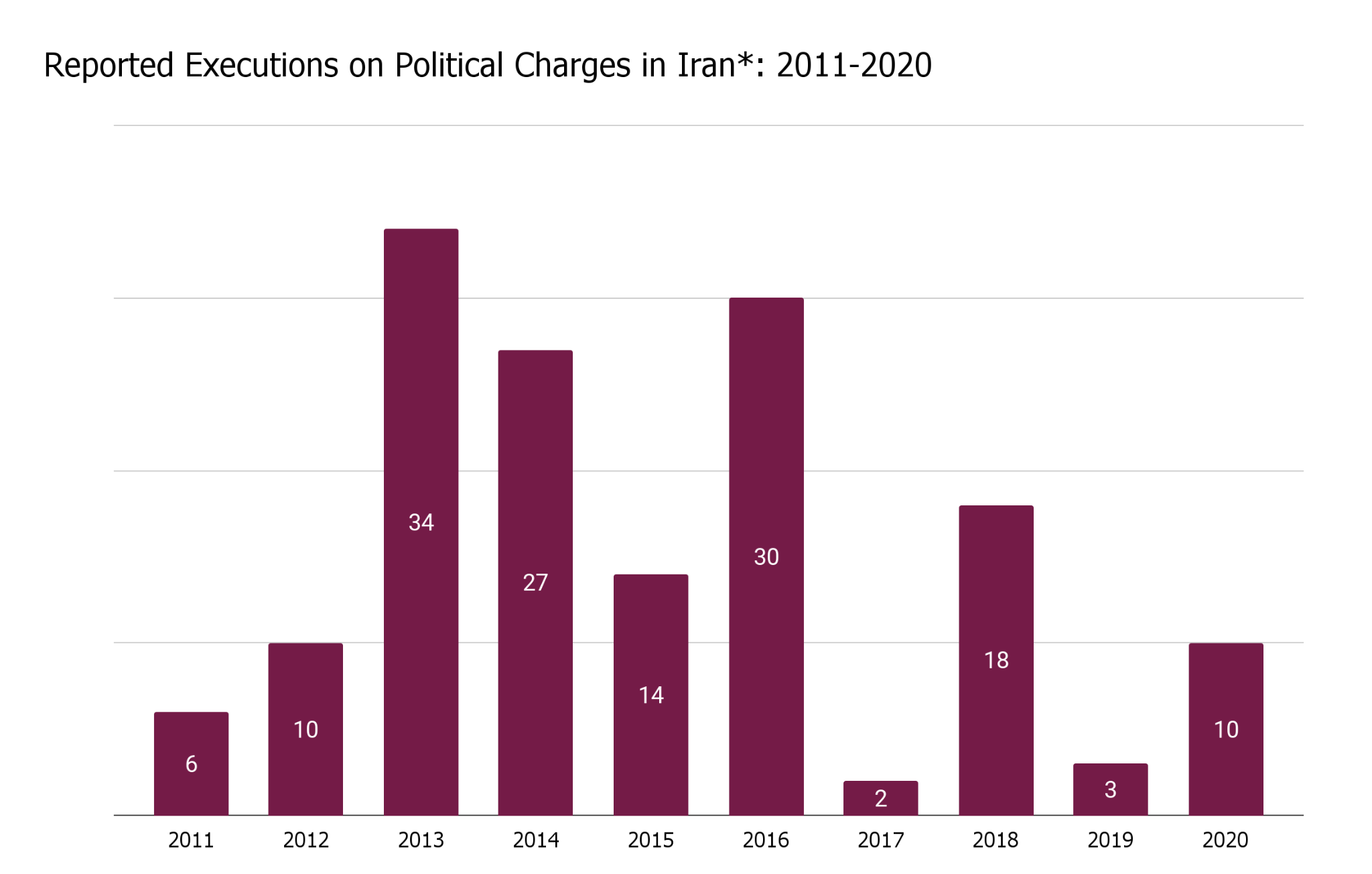 Furthermore, in the ten-year period, 2 people were put to death for religious offenses, 5 for economic offenses, and 8 for sodomy.

*Methodological note: The government of Iran does not make available official data regarding the use of the death penalty in the country. Figures are based on reports collected by ABC from official, semi-official, and non-official sources, including human rights organizations, as well as ABC’s own sources, including those with knowledge of prisons, and loved ones of individuals facing the death penalty. ABC’s figures are necessarily lower than real numbers as we regularly obtain information on unreported cases pertaining to previous years. ABC constantly updates the data it collects; information pertaining to a case, including the charge for which the death penalty was implemented, is subject to change.